It’s only 8 ¼ Miles to Dreamland 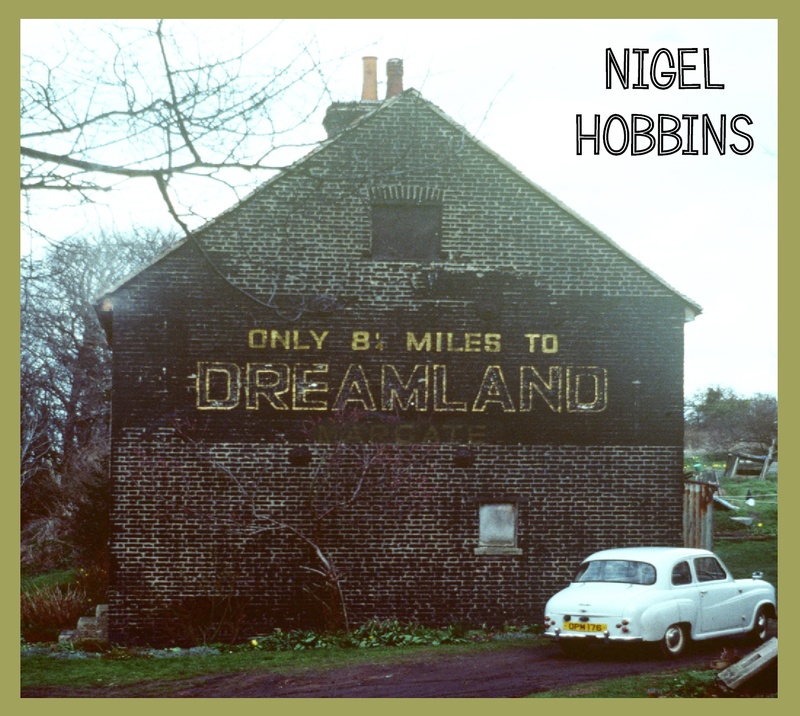 This fifteen track CD was recorded in Whitstable and Faversham, Kent during 2010. The songs consist of ten from the Hobbins stable and five traditional. A jamboree bag of songs focusing on Kent, signs, food, wishes, landscape, work and wages and other things. Many thanks to the following musicians and singers who have felt the need to pluck, scrape, blow, hit and holler.

If you don't want to purchase this CD over the internet, then please go to this page for contact details

It’s Only 8 ¼ Miles To Dreamland is the latest CD from the inimitable Nigel Hobbins. It’s a varied collection of songs, from reggae, to English Folk music, to sea shanties, to Scottish laments, to country howls, some of them written by Nigel himself, many of them traditional, but all inhabited by Nigel’s character and sensibility in a way that makes them uniquely his own.

According to the sleeve notes, the title track took him 30 years to write. And not a minute too long, if you ask me. It starts with a bike ride in the 1980s, and an enigmatic sign on the end of a gable wall, and from there proceeds to the memory of a childhood day trip to Margate, complete with candy floss and ghost trains and rioting skinheads. This is classic Nigel territory: gloriously colloquial, wry, evocative, local – how many songs can you think of with a reference to “Planet Thanet”? – sung with a broad Kent accent, and yet full of the kind of nostalgia that any person anywhere in the world would recognise, it sets the scene for the rest of the collection. Where is “Dreamland” exactly? Is it only that well-known amusement park in Margate, or is it also somewhere else, somewhere not so easy to define?

The rest of the CD takes us into a variety of “Dreamlands”: from the poetic reggae of Midnight Whispers (an old composition from his days in the Ashford based group Emotional Play) to the jaunty blues of Itty Bitty Dan, written as a celebration of his kid’s love of food; from the atmospheric dirge of Lowlands Away, a traditional folk song about the drowning of the singer’s lover, to Milligan Schottishe, which is almost like a Wurzels song, complete with brassy jug noises and harrumphing chorus, all sung in a rich country burr.

The joy of Nigel’s music is his ability to create brand new songs that have the air of something received, while also breathing new life into old songs. Away, Haul Away is an example of the latter: a sea shanty which Nigel has “Hobbinised” with some choice lyrics about his adopted town, you can hear the particular pleasure in his voice when he sings about the fate of King Louis of France: “the people cuts his head off and it spoils his constitution.”

Other songs about Whitstable include Knockhimdown Hill, and Golden Days When We All Get Paid , the latter a gorgeous evocation of the scene at Starvation Point in the 1800s, when hungry workers would line up by the harbour gates in search of paid work. These are both new songs with an old feel. There is something deeply rural in them, something local, something English in the old sense, like a cutting taken from an old tree and grown afresh, they call upon a sense of another kind of England than the one currently on offer: a more authentic England, an England of the soul.

The song Ignore The Rain, with which the CD finishes, has something of the same feel, but, with lyrics by the poet Andrew Ling - who is far less famous than he should be - it finds its locale in Gloucestershire rather than Kent. It rounds off the collection by evoking the feeling of the end of summer. And with the summer on its way, and this being a summer record, perhaps that is right. Perhaps we will always remember this summer as the one that brought us It’s Only 8 ¼ Miles To Dreamland.

But I think it is the song Waly Waly which most epitomises the bittersweet and eclectic mood of the record. A traditional Scottish lament set to an African accompaniment, it intersperses lyrics about lost love and despair with a jaunty upbeat brass tune which seems to mock the fatalism inherent in the song.

I loved the last verse -

I had two dogs under me Father’s table,

They did prick their ears when they did hear the horn,

When I am dead dear it will be all over,

And I hope my friends bury me -

Followed by that jolly tune again, as if to say, “oh well, but we might as well enjoy ourselves while we are here.”

The juxtaposition of the dogs pricking their ears at the sound of the horn and the call of death reminded me of some ancient mythological motif.

And this is, indeed, the tone of the record: like an old story retold in a new context, it has a deep sense of rootedness arising out of the very soil of Whitstable, a sense of place, and of history. A sense of being.